I Missed The Bus 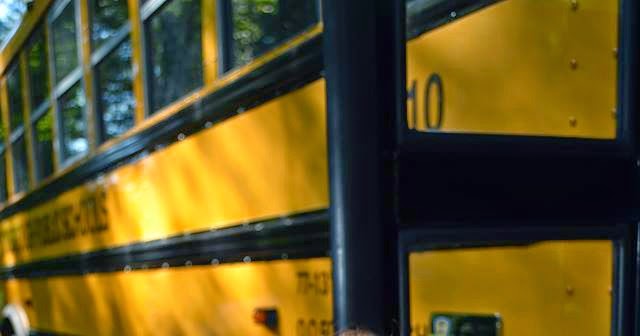 Yesterday, the boys and I were at our local YMCA. They were having fun playing with friends and we were just a few minutes up the road so I planned on getting home right before Isabelle's bus would arrive home. My brilliant planned was foiled though by an unexpected last minute potty trip and a driver in front of us doing 25mph in a 40 zone. They were unexpected things that I should have factored in enough time for but I didn't because we were SO close to home. I have no one to blame but myself.

As I was driving the few minute ride back home the panic started to set in that we weren't going to make it home in time. Ahead shortly in the distance I saw a bus and felt relief thinking it was hers. Even though it was ahead of me, I'd just follow it to my house and frantically beep and waive when they stopped. Alas, though that bus drove past our street and then I knew - no bus on our street and no bus in my rear view meant that I had missed it. It was exactly one minute past her usual drop off time.

I pulled in the driveway and wasn't even out of the car before my cell phone rang. It was the transportation director informing me that Isabelle was still on the bus since no one was home when they tried to drop her off. I told them I was home now and she radioed to the driver who was nice enough to turn back since she was just a bit further up in the neighborhood. I was overly and sincerely apologetic to the bus driver and she was super nice and understanding about it. She said that she knows I wait outside everyday and knew something must have just come up. I guess she had Isabelle go to the door and knock just to make sure and when I didn't answer she had Isabelle get back on. All I can envision is my poor little girl knocking on an unanswered door! Luckily, Isabelle was completely unaffected by the whole thing. She actually asked if we could do it again someday since she liked getting to go back on the bus - ha!

I'm sure that things like this happen frequently and in the grand scheme of things it's not that big of a deal but I'm still feeling pretty bad about it. Although, given the experience I can at least say that I'm glad that I live in a town that wouldn't just drop a Kindergartner off at a house with no one home. I'm glad that we have a great bus driver. I'm glad that Isabelle is independent enough to not freak out when her mother abandons her. Isabelle may not be scarred for life from it but I'm pretty sure I am. Going forward, you can bet that I will be home WAY before that bus ever comes!
Posted by Dollops of Diane at 12:04 PM