When Pre-K Drop Off Goes Wrong

Today was Isabelle’s first day of Pre-K. Last year on her first day of preschool, I had Tim stay home with the boys so I could drop her off just one on one in case there were any issues. When I dropped her off then she barely even waved good bye to me and had no problems whatsoever. She LOVED preschool all year so I figured her first day this year would go off without a hitch. Ummm…not so much.

The morning started out great and she was excited to go. She was dressed and with her back pack on a full half hour before we would even have to think about leaving. Since she was eager to go I decided we would head out and run a few quick errands on our way. So we all happily headed out the door as Isabelle held it open for us. She then turned and shut the screen door but didn’t realize Daniel was still standing in front of it. The door caused him to catapult down the flight of deck stairs and land face first on the pavement. The fall was BAD but luckily there were no major injuries. Conveniently since we were early we had enough time to go in and clean up the blood before trying take two of leaving the house! We were then able to take some pictures and successfully arrive at school on time. 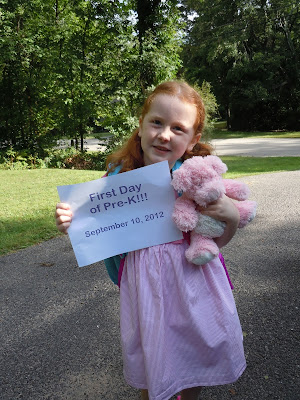 
Luckily, we are very familiar with the school and the people there so they know we are generally not “that family.” But today indeed we were. We were “that family” with a preschooler hysterically trying to fight off a teacher to get to her mother while her bloody faced brother screamed loud enough for everyone in the entire building to hear. On the plus side, there’s no place to go but up for Henry’s first day of school tomorrow! Right?!
Posted by Dollops of Diane at 3:15 PM