A Trip to the Mystic Aquarium

This past Saturday we had planned on taking a family trip to the Mystic Aquarium but our plan was foiled when Isabelle woke up early complaining of a stomach ache. Within a couple of hours she seemed fine but I didn't want to chance taking the car sick child on a 1+ hour trip each way. I assumed that if I left her home that she would be totally fine (which was the case) but that if I brought her she would spend the day vomiting on whales. Isn't that always how it works? Since we already had the tickets for the aquarium (which the kids didn't know about anyway), we decided that I would take Henry and my husband would stay home with Isabelle and Daniel. There was nothing wrong with Daniel but there was no way I was taking the terrible twos child if I didn't have to!

So Henry and I set off and we had....the best day ever!


I had never been to the Mystic Aquarium and let me tell you it is awesome! They have beluga wales, seal lions, seals, penguins and all kinds of super cool animals like that. All of those larger animals are located outside so if you go make sure you dress for the weather. It was raining when we went and I had no idea there was so much outside but luckily I had brought an umbrella.

It was so fun to go with just one child where we could focus on what he wanted to do. After we finished the outside part (where I couldn't get over how amazing it was) Henry said to me, "We haven't seen any fish yet!" Leave it to a four year old to not be in awe of the WHALE that was in front of him and just want to see some fish! Luckily, the inside part had plenty of fish for him.

They have a really cool jelly fish section and Henry also liked the sharks and eels. They have touch tanks too so you can get up close and personal with some of the animals.

Since it was just the two of us, we also took in their Sponge Bob 4D show. Henry has never been to the movies and also never seen anything 3D (or 4D!) so I wasn't sure if he would be freaked out but he loved it. 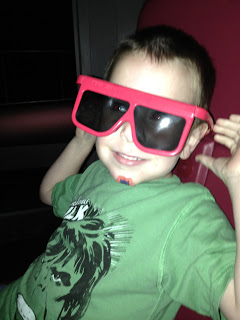 We then headed to the Titanic exhibit where Henry had tons of fun playing in the mock submarine.
After all that fun, we headed to the Penguin Cafe for a late lunch and before heading out I even let Henry pick out a toy from the gift shop. That is something that I NEVER would do with the three of them! Here he is on the ride home with his new friend "Beary"... 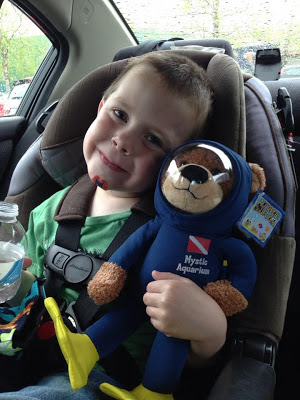 I seriously think that we both had smiles on our faces all day long. It was such a special day to share with my little guy!

*My family received complimentary tickets to the Mystic Aquarium which included passes to the 4D show and the Penguin Cafe. As always, all opinions are my own.*
Posted by Dollops of Diane at 10:21 AM