Boys and the Potty: WTF?

As I mentioned last week, Henry is now potty trained. He is doing great and not having any accidents, however, there is a problem. I had no idea how completely out of control a three year old’s little man business is. That thing is like a fire hose. The full force of it is incredible. Now clearly, I don’t have a penis so I am like the blind leading the blind while helping him. We started out sitting down on the potty since that seemed like the thing to do. Even with sitting, that thing is still shooting urine out everywhere!  A quote from Henry: “Winkies like to go everywhere but Mommys like them to stay in the potty.” Very true, Henry. Very true. So then I figured I should just have him stand since maybe that would be better. Umm…no. The first time standing included ME holding him in place and we still ended up showering the bathroom with urine. If I can’t even aim it right, how can I expect him to??  It also doesn’t help that he will think he is done only to be fooled and have more come out. I am doing so much extra laundry just because of dribbles, leaks, and fire hose episodes in the bathroom. The two of us in there are actually quite the comical team. Thank God he’ll have no recollection of this when he gets older. Potty training girls was so much easier. At least I know what’s going on down there!  So we’re going to just keep tackling it with an end goal of getting ALL urine in the potty. Until we get over the learning curve, I’ll be keeping lots of Clorox Wipes on hand! 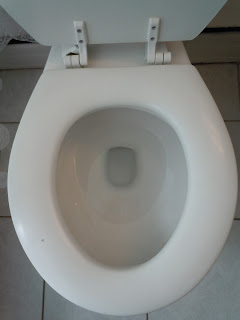 Posted by Dollops of Diane at 2:33 PM