Everything You Ever (and Never) Wanted to Know About Ticks

In our area, ticks have become a huge issue this spring. It is only April and we have already found one on Henry, one on Daniel, and one on me. Earlier this week, I was outside in the backyard for all of ten minutes and looked down to see one crawling up my jeans. They are out of control. Now I’m no Tickologist so I went to the almighty internet to find out some facts about these little suckers (literally). The more I read the more fascinated and disgusted I became. I figured I’d share my findings since many of you are in the same boat as me – obsessively checking pets and children and constantly feeling like you have a tick crawling on you. 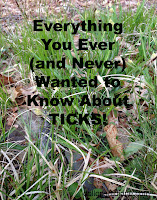 Are mild winters to blame for lots of ticks? I’ve heard a million people say it’s going to be a bad season for ticks due to the mild winter that we had. Well it turns out that it’s not the warm winter but the availability of hosts that makes the population high. In 2011, there was a surge in the population of white-footed deer mice due to a huge crop of acorns (their food) in 2010. Who knew? Since mice are the prime and preferred host for ticks they had plenty of hosts available for the choosing. On top of that, the mild fall/winter meant that the ticks were able to remain active and not die off. Add a mild spring to that mix and now you also have hibernating ticks waking up early. It basically turns in to a triple whammy!

What are the life stages of a tick? Okay, no one has probably ever wondered this (including myself) but it’s actually kind of interesting.

Stage 1: Larva – Eggs laid in the spring hatch into larvae in the late summer (peak August). They are no bigger than a newsprinted period and wait on the ground to attach to a small mammal or bird. The larva feeds over a few days and then drops off. It will not need another meal until it reaches the next stage of its life cycle.

Stage 2: Nymph – Larvae form into Nymphs in the fall and generally remain inactive throughout the winter until spring. Their preferred hosts are small mammals and birds but will also feast on pets and humans if given the chance. Nymphs are about the size of a poppy seed so they often go unnoticed until they are fully engorged (4 -5 days). Due to the small size, nymphs are responsible for most human Lyme disease cases.

Stage 3: Adult – The Nymph drops off its host and waits until the fall for its next host. It can wait up to three feet off the ground on high grass or leaves to attach on to deer (preferred host) or pets/humans. Peek activity is in October/November. Approximately 50% of these ticks carry Lyme disease although they are often seen (due to size) and removed before they are able to infect the host. If adult ticks are unable to find a host they will hibernate under leaves until the early spring in a last ditch effort to find a host. If they are able to find a host, they will then mate and reproduce. A female tick lays approximately 3,000 eggs (holy smokes!!) in the spring which starts the whole cycle again.

What is the best way to remove a tick?

It is recommended that you do not apply a hot match or any other irritant (Vaseline, alcohol, etc) to the tick in order to get it to back out of the host. I must admit that we have been known to use the match trick (not on the kids though).

What is the best way to prevent getting a tick bite?

What should I look out for if a tick was attached to me?