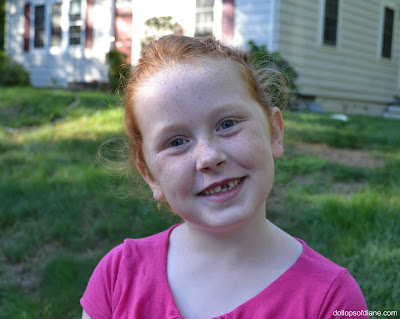 Yesterday, was Isabelle's first full day of kindergarten. As I wrote about earlier this week, I'm pretty scared about the whole process. Well, I'm happy to report that she and I both survived the day.

Now I'm actually not an emotional person at all. I'm not a crier - sentimental things don't tend to get to me. However, at orientation the day before there were a few moments that I felt something. I felt like maybe if I let it happen, water would fill up in my eyes. Crazy, huh? I assume this happens frequently to others but not me so it made me nervous that seeing her off on the bus would cause me to ACTUALLY cry (imagine?!). Isabelle has been very excited about school so I assumed unless there was some last minute freak out (which is always possible with kids) that she would be fine. And you know what? In the end, we were both totally fine.

When the bus pulled up, I snapped a few pictures and without missing a beat she started climbing right up the stairs to board the bus. She had actually made it up a step or two before she turned around and said goodbye to Henry and then to me. Yup, not only did she almost forget to say bye to me but she also didn't even say bye to me first! When she got on she already had a friend from pre-school sitting on the bus waiting for her. I saw her sit down with her friend and they were off. She never even looked out the window to waive to me. It was so natural. It felt like she had been doing it for months. I knew in that moment that she was right where she belonged - right where she needed to be. How could I even be sad in a moment that felt so right?

She returned home a long seven hours later (which seemed SO long) and was still as happy as when she left. She had a great day, met new friends, and had no complaints (minus not having enough time to eat the cookie I packed her for lunch!). All in all it was a great first day (for both of us!). She was up early again this morning and excited for day two. What more could I ask for? 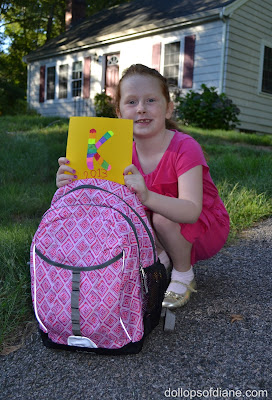 Posted by Dollops of Diane at 9:06 AM