A Very Unexpected Find in the Woods

I decided the kids and I should enjoy the beautiful weather today and have a picnic lunch and go for a walk at a local state park. I ended up rushing lunch short because the spiders, inch worms, and bugs were out of control there. I mean I get it, it’s nature and all but can’t they leave just one picnic table alone for me to enjoy?! Anyway, so after potty trip number two we headed off down the trail to explore nature at its finest. The kids loved running in the woods, collecting sticks, throwing rocks, and watching the water. The "highlight" of my day though was finding an elderly man on the ground on one of the paths. At first I thought he was just sitting taking pictures because he had a camera around his neck. Upon further evaluation and seeing his belongings scattered around it was clear that he had fallen and wasn’t able to get up on his own. Lucky for him, I’m an old pro at helping the handicapped get around (shout out to my Mom!) so after a few attempts I was able to help him back up to his feet. I then handed him back his cane, gathered his items, and helped him back to his car (which had handicapped plates). Conveniently, he had parked nearby basically in the middle of the woods on a path where I am 99% sure that you are not allowed to park. I can just see this man’s family telling him to stop taking his elderly, handicapped, cane ridden body out to the middle of the woods to take pictures of birds and him flat out saying no. The thing about old people is that they are stubborn. God love them. But it turns out the real lucky person of the day was not the injured stranger who I helped but it was actually me because when I was helping the man this is what my kids were doing… 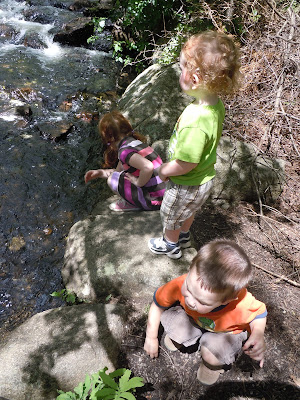 It’s a MIRACLE that one of them didn’t end up in the water. Karma at its finest!

Posted by Dollops of Diane at 7:46 PM