We came home from vacation to some big news in the mail. Both Isabelle and Henry won a drawing contest put on by our local septic tank pumping company.  Yup, nothing but glamorous contests here in the Dollops household! The contest asked the kids to draw a picture of either the owner of the company, his truck, the pump procedure, etc.  Henry drew a picture of the owner which probably could have also been mistaken as a picture of a blobby monster. Isabelle chose the owner (named Buddy), truck, and pumping route. My hubs is an environmental engineer who spends most of his days designing sewer and water pumps (or something like that) so he was quite proud of her drawing.  I snapped this picture of her drawing before I sent it off so that he could treasure it always. 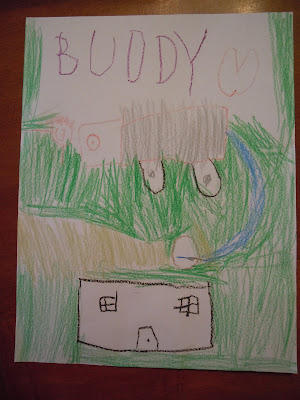 Now in all honesty, they were not the grand prize winner and I can only imagine the number of entries was quite low but they are WINNERS all the same. So we promptly took their $10 Am Ex gift cards and headed off to buy new toys. Winning feels damn good.
Posted by Dollops of Diane at 8:52 PM