My Memories of the Boston Marathon

As we all know, what started yesterday as the running of the 117th Boston Marathon ended in horror and tragedy. While I was nowhere near the finish line this year, I have been in the past. Now as we know, I’m not a runner but in Boston you don’t need to be a runner to have amazing Patriot’s Day memories. Back in my carefree days, my friends and I would take the day off from work and head to the city bright and early. It didn’t matter if we had tickets to the Red Sox game or not, you would head towards Fenway. We would sit in one of the bars in the area which would have the Sox game on half the TVs and Marathon coverage on the other half. You had to get there early because all the local bars were always packed. Everyone was happy and everyone was a sports fan (even if just for a day). It was the unofficial start of spring and the official start of drinking Stoli Raz and Sprites on the patio season for me. We would then meander our way towards the finish line. We would marvel at the amazing people who could run – like really run. We would cheer, we would support, and we would celebrate. I’d always leave a little sun-kissed and with a little too many drinks in me. It was always a great day.

Even on years that I couldn’t make it, I would drive parts of the Marathon route on my way to work. People old and young would be lining up on the sidelines to cheer on their loved ones. On my way home, workers would be sweeping up countless orange peels and paper cups. It made you feel proud and envious of the amazing people who had been there hours before.

Yesterday morning I woke up thinking of all my happy memories of those days gone by and silently wishing luck to all the runners lacing up their shoes. Then tragedy struck and I was reminded of other memories – memories of September 11, 2001. When the Twin Towers were struck I was at work in Boston. We watched the news unravel from our cubicles before a bomb threat was reported close to our building. I remember calling my mother and leaving her a message telling her that I loved her. I wanted to be sure she knew in case I didn’t make it home. We were escorted from the building by the bomb squad and told not to take the subway because it wasn’t safe. I remember feeling scared and lost. I can only imagine that the people in Boston yesterday felt what I felt but a million times worse.

Today, I am going to remember the positive memories that I have of Boston Marathons of the past. I will not let whoever is responsible for this take that away from me. I’m also going to remember the victims of yesterday’s attack, the first responders, and the average people who turned into heroes in the blink of an eye. 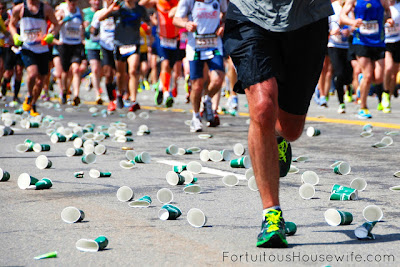 Photo courtesy of my friend The Fortuitous Housewife who, like so many Bostonians, was watching the marathon with her children earlier in the day never imagining what would happen later.